The pathobiology of cirrhosis and acute-on-chronic liver failure (ACLF), with an emphasis on alcohol-related liver disease (ARLD) 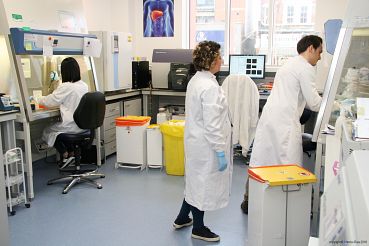 The pathobiology of cirrhosis and acute-on-chronic liver failure (ACLF), with an emphasis on alcohol-related liver disease (ARLD)

My group studies the pathobiology of cirrhosis and acute-on-chronic liver failure (ACLF), with an emphasis on alcohol-related liver disease (ARLD). We have specific expertise in animal models of liver disease, the study of non-coding RNAs, and the regulation of innate immunity.

We have 3 main projects underway:

1. The role of the IL-1 axis in the pathobiology of ACLF. The IL-1 axis has been shown to be of pivotal importance in determining outcome from cirrhosis and ACLF (Alcaraz-Quiles et al, 2017). The aim of this work is to define the mechanisms of IL-1 signalling in the processes of liver cell death and innate immune activation in ACLF, and identify novel targets for therapy.

2. The role of non-coding RNAs in ACLF. Non-coding RNAs have been demonstrated to regulate innate immune cell phenotype in response to systemic inflammation (Carpenter et al, 2013).  We have identified a novel long non-coding RNA (lncRNA) that regulates innate immune signalling in ACLF. This project is aimed at understanding the mechanism of this process, and developing oligonucleotide therapeutics in this area.

Published by: Foundation for Liver Research

⇐ Back to Research Projects

The Foundation runs on donations. Every little helps us continue our work.

1 in 10 people will experience problems with their liver at some point in their life.

We are a member of the Association of Medical Research Charities (AMRC).
All AMRC members support the AMRC position statement on the use of
animals in research.